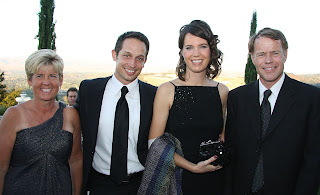 I’ve figured out about blogging: If you do it right, you don’t really need to write much…just point out great writing that others have done – such a snap!

We’re so glad that the Mercury News truly understands Valley Medical Center, as their lead editorial today urging a YES vote on Measure A clearly demonstrates:

“When Silicon Valley residents go to a hospital, they expect to receive quality care utilizing the latest advances in technology. That holds true at Valley Medical Center today. But it won’t five years from now unless Santa Clara County voters approve Measure A…” Read the full story here.

Also today in the Merc, our pal Sal Pizarro shared his thoughts on our 20th Anniversary Gala…and I’ll share mine: A HUGE SUCCESS! I cannot thank everyone enough for the work and support and sponsorships that made “Dancing On Top of the World” so much fun, but a few that we really must:

Our friend Chris Johnson took lots of great photos*, which you will see soon in all the papers, but Parsley, Sage, Rosemary & Thyme did too: www.psrt.com/vmc Check ’em out! We danced the night away thanks to David Dumont’s Li’l Big Band, and our volunteers kept things running smoothly – except the program, which I sort of torpedoed because, frankly, everyone was having too much fun to stop and listen to a speech.

Still, it would have been fun to tell the story of our founding, and thank the founders that were in the room: Brenna Bolger, Dr. Bob Violante, Susie Wilson, Gerry Beemiller, and Peggy Fleming-Jenkins and Greg Jenkins. Thanking John and Sue Sobrato and singing “Happy Birthday” to our board chair, Leah Toeniskoetter, would have been fun too. Instead, you got to read this, and also Sal’s column:

To celebrate its 20th anniversary, the Valley Medical Center Foundation wanted its annual fundraising gala to be a truly special event. Saturday night’s “Dancing on Top of the World” certainly qualified on that account.

More than 400 people in black-tie and evening gowns flocked to the beautiful, chateau-like home of Chandra and Narpat Bhandari in the Los Gatos hills, where they took in sweeping views of Silicon Valley and danced the night away in a gorgeous ballroom to the sounds of David Dumont’s Lil’ Big Band.

Guests were spread throughout several rooms and the grounds for dinner, so there were new faces to greet every time you walked into a room. I didn’t run into some people until the evening’s end, when everyone was waiting at the great common denominator: the line for the shuttle to get back down the hill.

Chris Wilder, the VMC Foundation’s executive director, made a really smart call (suggested, I’m told, by John and Sue Sobrato) to cancel the program and auction portion of the night so as not to interrupt the fun, lively vibe.

But I know what Wilder would have told the crowd if they had been herded into the estate’s grand ballroom: The lack of organized opposition to Measure A, the $840 million bond measure to seismically retrofit Valley Medical Center, doesn’t mean the hospital’s supporters should be complacent. The crowded November ballot means getting positive word out about the measure is more important than ever.