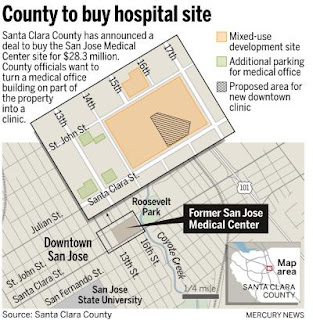 Alert readers of this blog remember that Measure A, passed a year ago by the oh-so smart and good-looking electorate of Santa Clara County, provided not just $790M to rebuild VMC, but $50M for health services in downtown San Jose.

So you want progress? Here’s progress – and a huge congrats to San Jose residents and thanks to the team that negotiated this deal…from today’s Mercury News:

Five years after downtown San Jose lost its hospital, Santa Clara County on Tuesday announced a surprising $28.3 million deal for the site in a plan that promises to bring back more than doctors and nurses.

“It gives the downtown a shot in the arm,” said Sam Liccardo, the neighborhood’s city councilman. “I know the community will be thrilled to hear that medical care is coming back.”