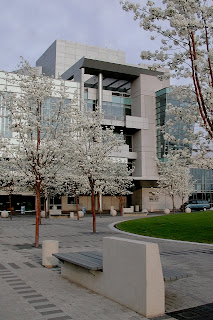 I know not everyone reads the San Jose Mercury News every day…but I do, and in case you missed today’s lead editorial, it’s crucial.

It concerns us all.

Please take a moment to learn about one of serveral threats to Valley Medical Center, and if you have friends in other states whose congressional rep’s may not yet “get it”, why not send them a link to this page? Thanks…read on:

President Bush has spent the past seven years worsening the nation’s health care crisis. The number of uninsured children has grown from 7.9 million to 8.7 million in the past four years, now nearly equal to the population of North Carolina.

But that may not be his worst health care legacy. That would be the harm he’s caused to public hospitals, including Santa Clara County’s Valley Medical Center and the Alameda County Medical Center. Aiming to privatize health care, Bush has been draining resources from the only recourse left to uninsured residents who are sick or injured.

He’s taking one last whack at public hospital budgets this spring by trying to further limit federal payments for Medicare and Medicaid. Congress must not let this stand. It should extend a moratorium on new cost limits for a year.

California’s public hospitals would lose $500 million under this proposal. That would mean a $40 million hit for Valley Medical Center on top of funding cuts by the county, which is facing a $174 million deficit.

The threat to Alameda County Medical Center is even greater, since a quirk of the administration’s proposal would punish public hospitals that are not directly run by the county. The Oakland hospital could lose $100 million, about 20 percent of its budget.

Alameda County filed suit over the anticipated cuts, which would be unfair and excessive. The U.S. District Court in Washington, D.C., last week agreed. That at least could delay implementation.

Federal officials say they’re trying to rein in costs, but they’re not. They’re simply passing them along to counties, which in many cases are barred from turning away emergency and trauma patients. The federal government instead should find ways to reduce the number of uninsured and support preventive programs to keep people from developing chronic diseases that cost so much to treat.

Another provision of the proposed rules is especially troubling. After 40 years of sharing costs, federal officials want to stop paying to help train future doctors. Valley Medical now trains one out of four doctors in the county. Pulling federal support will lead to greater shortages of doctors, already a national challenge as baby boomers age.

California’s congressional delegation opposes the Bush payment limits. Members will need all the support they can muster from valley leaders – including business – when Congress reconvenes Tuesday and attempts to block these draconian rules.