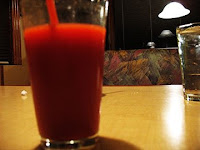 On this Cesar Chavez Day, I thought we’d discuss food: The kind grown in the ground and picked by good people who work much harder than I do.
If I ate more of that kind of food – fresh fruit and veggies – maybe my doctor, Chris Snow, wouldn’t have resigned from VMC last year after taking my blood pressure. There’s no known connection, but still.
I actually do okay with the green leafies, being vegan and all, but the real problem is SALT. I promised Dr. Snow last year that I’d stop dumping the salt shaker over on top of everything I ate, but he explained that wasn’t the main problem…yes friends, the issue is processed foods: Pre-cooked, additive-rich, and pre-packaged. Welcome to the American Diet.
Food from a carton or can or box likely contains tons of salt. All that stuff in the middle isles of the grocery store, and most of the stuff Americans seem to love…it’s all processed. “Oh, but this can of tomato juice is so GOOD for me,” I hear you saying. Check the nutrition facts, and wonder no more why after drinking that can your heart feels like it’s trying to escape from your chest Alien-style.
I’m being cute about it I know, but this is serious: Hypertension kills millions of us every year. Slows some of us down too; my pal Bruce had a heart attack last week. And VMC Foundation major supporter and prominent attorney Richard Alexander just became an evangelist against salt.
You see, Dick Alexander is a big dude like me, and realized he could do more for his health after a no-salt, no sugar retreat he attended. He writes eloquently about why we ALL need to cut back on salt, and you should read it by clicking here.
And then look for me and Dick in the Valley Medical Center cafeteria. We’ll be the guys stealing all the salt shakers…because we “heart” you thiiiiiis much.
/wp-content/uploads/2017/11/VMC_Hamburger_Logo_Blue-1.svg 0 0 E. Christopher Wilder /wp-content/uploads/2017/11/VMC_Hamburger_Logo_Blue-1.svg E. Christopher Wilder2009-03-30 07:08:002009-03-30 07:08:00Delicious and deadly…shaking our hypertension
2 replies