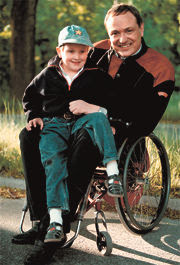 The man they call “Sweden’s Christopher Reeve” visited Valley Medical Center today. Claes Hulting, M.D.(find him on Facebook) is consulting with the Palo Alto VA, about his dream of 20+ years ago to build the world’s greatest spinal cord injury rehabilitation center.

Many say he’s done it, and predictably, it took a combination of private donations and new thinking. Dr. Hutling was injured in 1984, and his doctors immediately told him he should not follow through with his marriage (planned for two weeks later) because he’d just be a vegetable. Shocking and outrageous, yes, but it set him on a path to create Spinalis.

Spinalis is his amazing rehab center in Sweden which looks more like a Silicon Valley tech company. Bright colors, elliptical corridors, a huge central kitchen, tables that bolt to the ceiling (great for users of wheelchairs), and a vibrant atmosphere that makes you think you’re in Google’s café rather than a hospital. “I wanted a Studio 54 feel”, he told VMC’s assembled physicians this morning.

That “feel” begat media coverage, more grant funding, and allowed him to spread his methodology of healing – summed up best by Iggy Pop’s immortal “Lust for Life”. “As time goes by,” Dr. Hulting told us, “I’m less interested in the body and more interested in the mind” as it relates to life beyond a spinal cord injury.

So here’s the good news: We’ve been operating with the same philosophy for decades at Valley Medical Center, which is partly why we’re a nationally-recognized rehabilitation destination. Better news: VMC’s rehab center is moving in a couple years to the new wing we’re building as a result of 2008’s “Measure A” passing.

The best news: We have an opportunity to incorporate many of the great ideas that Dr. Hulting shared with us today…but like his Spinalis center, the “New VMC Rehab Center” will need private philanthropy and partnership to reach its full potential. The alert reader of this blog will remember that we’re already out in front on patient technology access, and in fact Dr. Steve McKenna simul-cast today’s lecture to the VA Hospital, but there’s so much potential.

So, if you are able and interested in helping create our own “Spinalis” concept right here in Silicon Valley, contact me and let’s talk!