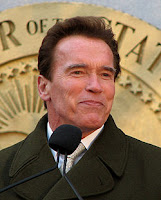 On the eve of the President’s health care summit, I spent a day in Sacramento with my American Leadership Forum class. We’re a small group, but represent a cross-section of industries at fairly high levels – so we got a high-level look at how things roll at the state-level.

In short, things are NOT rolling well.

Whether you care about health care reform or solving the $20B budget shortfall mess, Sacramento is “broken”. We heard this consistently, starting with Senator Joe Simitian, who painted a grim picture of what he called Hyperpartisanship. “If you even appear to reach across the isle”, he told our group, “you wake up to find you’ve been stripped of committee assignments or that no one will support ANY bill you author – regardless of the topic.”

We met with Possibly-Maybe-Soon-to-Be Lieutenant Governor Abel Maldonado, who agreed. “Used to be,” he said, “that we were Republicans or Democrats when debating on the floor, and then Californians when spending time together after hours. No more.” I agree that he should be confirmed, and that the hold-up is a great example of Simitian’s Hyperpartisanship. It’s also silly. It’s the Governor’s choice, and unless Abel has a screw loose, they should give him the job and move on (his screws aren’t loose; I’ve gotten to know him and although I don’t agree with him much of the time, he’s a good man and incidentally, really loves Valley Medical Center).

Speaking of the Governor, I got to visit his cigar-smoking tent. Yes! No one gets to do that! More importantly, we had lunch with his Chief of Staff, Susan Kennedy, who is one of the most experienced and brightest bulbs in the chandelier. A career-long Democrat, she risked (and lost) life-long friendships when she agreed to work for Arnold Schwarzenegger.

She lost ME only when I asked her if she could provide her opinion of just how the partisan divide grew so wide over the past dozen years or so, as described by every legislator we’d met with that day. Ms. Kennedy shot back that it hadn’t; it’s always been this way, and in fact we’ve gotten lots of great stuff done in the past couple years. I kept myself from reminding her that 2007 was supposed to be the Year for Health Care Reform in California. Other than supporting Obama’s plan, let’s be honest: Schwarzenegger hasn’t shown up for health care at all.

So we cannot even agree on the problem.

Can we agree on any solutions? Possibly.

Pretty much everyone we met with understands that term limits have screwed everything up (I agree) and should be extended or even abolished. We met with many moderate Dem’s and Rep’s who all want the “Open Primary” to pass in June (I’m not sure yet). Pretty much everyone opposes the idea of a Constitutional Convention (me too), and I have to disagree with Assemblywoman Fiona Ma’s suggestion that “Democrats dislike public/private partnerships”. This Democrat doesn’t, and in fact many VMC Foundation successes have come from them.

We ended the day with a final meeting with Joe Simitian, where he handed out hankies to dry our crying eyes. We’ve got to change the system – we all agree. How long has it been broken, you ask? Well, in thanks for reading this far, two quick stories offered by Assemblyman Nathan Fletcher: He was asked recently how he felt about California’s legislature having a 9% approval rating. His response: Who are those 9% and what could they possibly be thinking?

Second, he took us back to the 1850’s and why Mount Whitney is called that. It’s the highest peak in our state, and is named for a geologist/surveyor named Josiah Whitney. When legislators moved the State Capitol to Sacramento, it was to be near and with the railroads. Railroads attracted mucho dinero in Federal subsidies to build track, and building in mountainous regions cost more – and therefore meant the fed’s paid more dollars per mile than those built on flat ground.

Can you guess? According to Assemblyman Nathan Fletcher, our legislature (largely controlled by railroads then) benefitted greatly when Mr. Whitney reported to the federal government that all land east of Sacramento in California was mountainous. Cha-ching! To show their gratitude, our elected officials named our highest peak for Mr. Whitney.

So some things change…and some don’t!