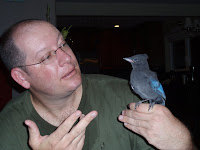 Getting tired of reading my thoughts and musings in “The Wilder Side of Health?” No, of COURSE you’re not…but, there’s more to say, and more voices with which to say it.

That’s why The VMC Foundation is proud to announce the launch of its new blog: VMC Foundation Lifelines. This forum will be used to highlight trends in heath care, philanthropy and how “The Great Recession” is impacting people in all walks of life in Santa Clara County.

It will also provide you a venue to meet the doctors, nurses, administrators, therapists, technicians and others who make Santa Clara Valley Medical Center one of the finest county hospitals in the country.

Just now, you can learn about how many High School students fainted during a recent tour, and about the biggest grant we’ve ever sought (help us by crossing your fingers!)

You can also connect with us on Twitter http://www.twitter.com/vmcfoundation

Yesterday, the staff of the VMC Foundation had the opportunity to take 40 high school students from the San Jose Leadership Academy on a tour through VMC. The group, composed of Juniors from seven San Jose Unified high schools, spend nine months expanding their awareness of the San Jose community, networking with their peers, and inspiring change. We conduct tours each month but rarely with young adults from the community, so this was an exciting day for the staff of the VMC Foundation.

Before touring VMC, the youth from San Jose Leadership Academy had visited the county jail and a homeless shelter downtown, two experiences that opened the eyes of these high school students to a completely new side of San Jose. After observing these county services it was fitting for them to tour our county’s Safety Net Hospital. We were given the chance to show how comprehensive VMC’s system of care really is. The young leaders were able to see our Valley Health Clinic at Bascom, which serves a large portion of San Jose’s homeless population. We were also able to point out that we really do treat everyone regardless of their ability to pay here at VMC, even prisoners from the jail they just visited! Educating the community to the vast array of services that are offered throughout the Health and Hospital System is a critical part of connecting everyone to the mission of VMC.

Touring our hospital for the first time can be an emotional experience. Being exposed to people receiving care during critically important moments in their life can sometimes feel invasive. Seeing pre-mature infants being cared for in our Neonatal Intensive Care Unit is an experience that you will never forget. The students from the San Jose Leadership Academy approached this tour with a mature curiosity that was contagious. In fact, the first question some of the youth asked us (even before the tour started!) was, “how can we sign up to volunteer?” Talk about being impressed!

A big thanks to the San Jose Leadership Academy, to their leader, Rick Holden, and to the VMC Foundation staff for conducting the tours. We can’t wait until next year!

For more information on the San Jose Leadership Academy, go to: http://www.sjleadership.org/sjlc/npo.jsp?pg=about

SANTA CLARA COUNTY, CALIF.-Approximately 1.5 million people suffer from Traumatic Brain Injuries (TBIs) each year, and TBIs are the leading cause of disability for individuals under age 44. Santa Clara Valley Medical Center is joining Stanford University Medical Center in the Progesterone for the Treatment for Traumatic Brain Injury (ProTECT) collaborative study to research if the administration of progesterone improves patient recovery.

“We can achieve exponentially more when public and private entities work together,” said Board of Supervisors President Ken Yeager. “As one of three trauma centers in Santa Clara County, VMC is an ideal partner for Stanford in this important study.”

The VMC Foundation just submitted a $20 million federal grant application to establish a Patient Care Collaboration Platform through the Beacon Communities program. This exciting health information exchange will create seamless transitions of care for the “shared” patients seen at both the Santa Clara Valley Health & Hospital System and the Community Health Partnership clinics by creating an online portal where providers can access information about common patients. A huge thanks to the grant team from SCVHHS and CHP for their contributions to the submission. This is the VMC Foundation’s largest grant application ever! Stay tuned to find out if we are awarded the funds in March.

As I’m sure you know – or can easily understand – hospitals work really hard to prevent infections in patients…but the truth is, infections of all kinds happen, and in hospitals it’s a major concern.

That’s why Valley Medical Center is very proud of its record in preventing them, as described in today’s release by Consumer Reports. CR is all no-nonsense, so you know their putting us in the top tier really means something.

Ironically, as VMC works to increase our use of technology, it’s a low-tech solution that works to prevent some infections. Just goes to show you – or remind you – it’s really all about the dedication of the team, isn’t it?

Below is a portion of their report, with additional info available here. See the fourth paragraph, where they refer to VMC as an “urban giant”. Is that like the green guy on the broccoli package?

YONKERS, N.Y., Feb. 2 — Far too many hospitals expose patients to deadly central-line bloodstream infections despite the availability of a simple life-saving checklist proven to prevent hospital acquired infections, says a new investigative article in the March issue of Consumer Reports.

The report coincides with the addition of infection rates to Consumer Reports’ in-depth hospital ratings available online at www.ConsumerReportsHealth.org.

A First for Consumers; For Too Long “in the dark”

“For far too long, consumers have been in the dark, with no easy way to find out how well their hospitals perform when it comes to these often deadly infections,” said John Santa, M.D., M.P.H., director of the Consumer Reports Health Ratings Center. Consumer Reports collected and compared data for ICUs in 926 hospitals, finding tremendous variations within the same cities and even within the same health-care systems. Bloodstream infections cause at least 30 percent of the estimated 99,000 annual hospital-infection-related deaths in the U.S. and add on average $42,000 to the hospital bills of each ICU patient who gets a central-line infection.

Meanwhile, determined reformers across the country have shown that hospitals can cut their infection rate to zero or close to it by following a low-tech program that includes a simple checklist. Those hospitals range from modest rural hospitals to urban giants such as the University of Pittsburgh Medical Center Presbyterian, St. Joseph Medical Center in Tacoma, Harris Methodist in Houston, Santa Clara Valley Medical Center in San Jose, and seven Kaiser hospitals in California. The full list of 105 U.S. hospitals that have tallied zero central-line infections in their most recent reports can be found at www.ConsumerReportsHealth.org.