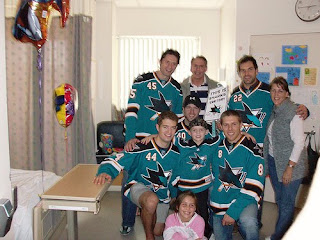 VMC Foundation sports reporter Chris Wilder, here…the question I’m most often asked is “So the San Jose Sharks can win big on the road and have a great penalty kill, but how are they with children?”

Yesterday we found out: They RULE! Spending the afternoon with some of our young patients at Valley Medical Center was the following star lineup:

Supported by their wives and girlfriends who helped raise $17,000 for our pediatrics department, these hockey heroes could not have been more terrific. On their own time, they spent time with kids who, despite the excellent quality of their care, are not stoked to be in a hospital. S.J. Sharkie (the team mascot) was of course also on hand…it never fails to amaze me that kids love Sharkie, even though he’s a 7-foot carnivorous fish with big teeth.

Seriously, this was a magic day at VMC…check the photos here, and help us root our team on to the Stanley Cup this year – these guys, and their wives and girlfriends, are truly class acts…like the staff at VMC. A huge thanks also to the staff of the Sharks, especially the team at the Sharks Foundation. Working together, we’re making cool things happen.

After voluntarily flying in a jet-copter last weekend (I have serious acrophobia), my friends and family are all asking me the same question: “Who are you and what have you done with Chris?”

They conclude I have been replaced by an imposter not just from the whirlybird incident, but also because I’ve been running. No, I’m not being chased, though that was my standard response for decades…until now. I blame my friend James MacGregor, Publisher of the Silicon Valley San Jose Business Journal:

JAMES: Maybe you should set some goals around running.
ME: I hate running. It makes me insane with anger.
JAMES: Nah, you just need to train for something!
ME: Fat chance.
JAMES: Tell ya what – if you run the 2009 Turkey Trot, I’ll run it with you.
ME: James, you could run that race TODAY, twice!

…and so on. Sadly, the more James talked, the more sense he made, so I am training to run the 2009 Applied Materials Silicon Valley Turkey Trot on Thanksgiving morning. This race is ten kilometers, which is something like 300 miles if my math is correct.

So I started running in August, and guess what? It’s not bad! I’m actually enjoying it, and ready to take on the Turkey Trot. Here’s a thought: Why not run it with me and James? It’s not expensive, so let’s get a VMC Foundation team together…if you’re game, send me an email at echristopher.wilder@hhs.sccgov.org and we’ll join forces.

Here’s the best part: the Turkey Trot raises money for some super organizations, including the Children’s Health Initiative (I serve on their foundation’s board, and their work truly benefits Valley Medical Center’s patients). Let’s start Thanksgiving right, by giving back to our community and doing something good for ourselves too.

Amazing, really. Who am I and what have I done with myself? 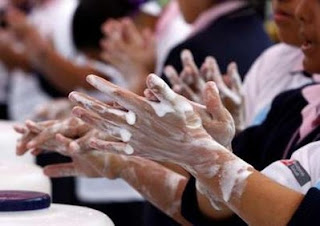 Today, October 15, is Global Handwashing Day…the one day a year when we’re supposed to wash our hands.

Oopsie. I’ve just been informed that we should wash our hands EVERY day, and frequently! Today’s commemoration is designed to spread awareness, instead of germs, which is what happens when we don’t wash our hands often enough. During a growing concern about Swine Flu (H1N1), it’s timely to discuss this simple but VERY important activity. So, here are some handy tips for handy washing:

Q: How often should I wash my hands?
A: All the time…after eating, before eating, after handling lizards, when the mud pies are all done, after gutting a trout, or just when you’re feeling a little grubby.

Q: Should I use soap?
A: Fo’ Sho’. That’s part of this campaign – and it’s a serious issue, because not everyone in all parts of the world has ready access to soap. But they should, and the UN, WHO and CDC are working on that.

Q: How long should I wash my hands?
A: Experts say you should sing a little song as you wash for maybe 20 seconds, something like “Happy Birthday”. Then go buy me a gift. When my hands are especially dirty, I always sing “The Battle Hymn of the Republic” until my wife begs me to stop.

Q: Will washing my hands mean I won’t get the H1N1 virus?
A: No, but I like your odds. Washing your hands (with soap, and then drying them) is the best way to avoid getting the flu, a cold, and whatever is growing in the Men’s Restroom.

Q: Things grow in the Men’s Restroom?
A: For women – you wouldn’t believe the things men get up to in public lavatories. Men are pretty gross regularly (we’re like bears with furniture, really) but somehow take it to the “next level” when in the confines of the toilet. And we men ALL know that some guys still don’t wash their hands before they leave. Yuck.

Q: Where can I learn more about handwashing?
A: Today’s observance means the Web is full of great info…search away, but remember the basics: Wash your hands. For real. A lot. As VMC’s Trauma Surgeon Gregg Adams told me yesterday, “I had H1N1 a few weeks back…it was awful, and I wouldn’t wish it on anyone.”

…even on those guys who don’t wash their hands after using the bathroom. 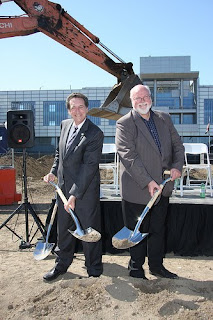 Even Assemblyman Jim Beall would agree that great news doesn’t come out of Sacramento every day…but thanks to him, and the Governor, today is one of those days!

That’s Jim there, on the right, next to Assemblyman Ira Ruskin. They helped us break ground on the new VMC Bed Building a couple of Fridays ago…and now, with the passage of Jim Beall’s AB303, other public hospitals have a chance to do the same.

As for VMC, Jim’s legislation gives us options on speeding up our construction plans and leveraging the generosity of the voters who last year passed Measure A. Check out the news release from Assemblyman Beall’s office below, and help me thank a great leader who has been championing VMC for a very long time. HOORAY JIM!

Assembly Bill 303 allows specified public hospitals and some private hospitals that are contracted to serve Medi-Cal patients to use local funding in place of state funding to qualify for reimbursement from the federal Construction Renovation Reimbursement Program for new capital projects to meet state seismic safety deadlines. Currently, there is no state funding available to draw those federal funding.

After 11 hospitals were completely or partially closed in the aftermath of the 1994 Northridge earthquake, the Legislature passed a 2013 deadline for hospitals to begin safety retrofitting or replacement of their most vulnerable buildings. The law also requires that hospital buildings with retrofitting must be replaced by 2030. Fifteen years ago, the initial total cost was projected at $14 billion to make the buildings safe. But more detailed and accurate studies have now placed that figure at $110 billion or more.

The bill’s passage was hailed by hospital officials on Monday.

“This bill really means a lot to us as a Public Safety Net institution,’’ said Kim Roberts, chief executive officer of Santa Clara Valley Medical Center, Santa Clara County’s biggest hospital. “Public Safety Net hospitals have the greatest challenge of how to meet the seismic mandates because we don’t have the funding. This bill is a great example of creativity.’’

Said Ron Smith, senior vice president of the Hospital Council of Northern and Central California: “In the current financial situation our country faces, this bill allows about 60 hospitals to raise enough capital to rebuild. It’s likely many of these hospitals would have otherwise closed. Without Assemblymember Jim Beall’s bill many of these hospitals might have closed.’’ 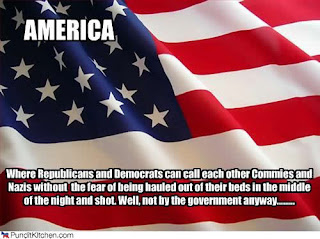 …Don’t worry, I haven’t been elected to anything – the country need not panic.

Tomorrow I’m flying to Washington DC, to give a presentation on how social media can help promote your medical center. You are reading this, so you helped…thanks!

Heading to our nations’ capital has me thinking about politics, especially since the health care debate has continued simmering all summer long. Last week, VMC’s executive director Robin Roche was talking to the management team about “the public option” – because that’s what we are, really. And about how Medicare is a pretty successful example of the public option, as is the VA hospital. I took the moment to shout “You LIE!” from the back of the room, Congressman Wilson-style. Everyone laughed, getting the joke, which was lucky because 1) the joke expired pretty much last week, and 2) if they hadn’t laughed, Robin would have kicked my butt.

But we have to laugh at the health care debate…for one thing, finding common ground is harder. From Senator Kyl’s “I don’t need maternity care” to death panels, to “health co-ops” (???)…well, I thought the circus came to town at our gala two weeks ago (see previous post).

My fave, though, came today in the report of House Minority Leader John Boehner’s comment: “The public option is about as unpopular as a garlic milkshake.” Leave it to our own Mike Honda to send him a basket of Gilroy garlic along with a poem praising the public option – and garlic – as being good for you. Congressman Honda admits to never having a garlic milkshake, which has me planning.

I’ll whip one up for him (soy milk, of course) and deliver it next week when I visit the Capital. If you have any unusual deliveries or messages you’d like me to take with me, let me know in the next few hours as I pack. I’ll be preparing for a week in DC by reading Dan Brown’s latest novel on the plane…it’s reputed frantic and over-the-top plot should be just the thing!