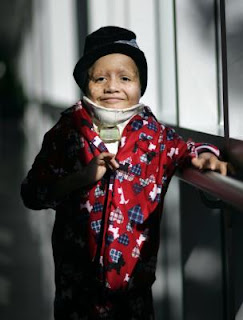 Edgar Flores was introduced to Silicon Valley on Monday…and by Tuesday morning, Silicon Valley was already doing what it does so well: Helping in a time of need.

Today, a day later, I walked in to the office in the early afternoon to find the VMC Foundation staff sniffing back tears as they opened envelope after generous envelope. Thousands of dollars, yes, but more touching: The cards, letters and wishes of well for a little boy who deserves all good things.
In case you missed this amazing story, please read the article from wonderful Mercury News columnist Patty Fisher, which launched this flood of giving – and have a happy Thanksgiving!
Fisher: A gift for Edgar

By Patty Fisher
Mercury News
Edgar Flores wants to be a doctor when he grows up. And what is it exactly that doctors do?
“They poke,” he tells me. “And they help children.”
Five-year-old Edgar has become quite an expert on doctors. After a car fire in July 2007 left him burned over 85 percent of his body, he spent five months in the burn unit at Santa Clara Valley Medical Center and had 16 operations. Several times, his doctors didn’t think he would make it.
But Edgar had too many plans to give up.
“I want to grow up to be a doctor and a firefighter,” he says now. “And a police!”
Weeks after leaving the hospital last December, he was running around and riding his scooter. Last month he was named student of the month in his kindergarten class at Trace Elementary School in San Jose .
“He always does his best,” said Kathy Rivera, assistant nurse manager of the burn unit. “He’s such a happy child that it makes it hard to feel sorry for him.”
Last week, Edgar was back at VMC for more painful skin grafts, and I stopped by to pay him and his parents a visit. The door to his hospital room was decorated with seasonal pictures of turkeys and a cornucopia he had colored in with crayons. He showed me his temporary tattoos — the planet Saturn and a shark — that decorate his arms, which are crisscrossed with marks from skin grafts.
“My nurse, Jennifer, gave me those tattoos,” he said proudly.
Edgar is a slender little boy with bright eyes and long, dark eyelashes, the only hair on his head. He has just two fingers on his right hand. Flannel pajamas conceal the scars on his legs, and two bandages on his tummy cover the places where healthy skin had been removed and grafted onto his neck.
He doesn’t remember much about the fire. He and his big brother were on their way home from a family gathering in his uncle’s Volkswagen van on a warm July day. As they drove through Pacheco Pass on Highway 152, the engine in the rear of the van caught fire.
Edgar, who was strapped in a booster seat in back, couldn’t get out. His uncle and 8-year-old brother, Jose, tried to release him. Jose badly burned his hands and face. Eventually another driver stopped and used a knife to cut Edgar out before the fire trucks arrived.
From the day Edgar and Jose arrived at VMC, the family won the hearts of the staff.
“We watched the way the family stepped up, how worried Jose was about his little brother,” Rivera said. “We’ve watched these parents work with Edgar and help him cope with his injuries. He does really well with what he has.”
As we stood around Edgar’s hospital bed, his mother, Margireta, gently stretched the muscles in his feet. He has a tracheostomy, a permanent opening in his throat, and she needs to clear it several times a day. But she can’t keep up with him on the playground.
“All the children know they have to be careful with him,” she said in Spanish.
Edgar’s father, Miguel, lost his job detailing cars because he spent so much time at the hospital. Since then he has had only occasional construction jobs. MediCal pays for Edgar’s treatment, but his parents are having trouble making ends meet. In addition to Jose and Edgar, they have a 3-year-old son, Miguel Jr.
“We have gotten help from family,” his father said, “but it has been very, very difficult.”
That’s when the people who saved Edgar’s life stepped in with some extra special caregiving. The nurses in the burn unit passed the hat and raised $720 in three days to help the family pay its rent. Local firefighters pitched in $2,000.
VMC spokeswoman Joy Alexiou said the staff members will provide gifts for the Flores family this Christmas. But they’re hoping others in the community will step up and help buy Edgar the present he wants more than anything: a computer.
The injuries to his hands will make it difficult to type or write with a pencil, so it’s essential that he adapt to a computer in order to succeed in school.
“He needs something with a touch screen because his fingers aren’t strong enough to use a mouse,” Alexiou said.
When she first told me Edgar’s story, I thought it odd that the burn-unit nurses, who see so many severely injured children, so many family tragedies, would take up the cause of this one little boy. But having met him, I understand.
“He’s a very smart little boy with a wonderful attitude,” Rivera said. “He has us all wrapped around his little finger.”
if you’re interested: To help Edgar, mail checks made out to “The Edgar Flores Fund” to the VMC Foundation, 2400 Moorpark Ave. #207, San Jose 95128. Or donate online at http://www.vmcfoundation.org/.
/wp-content/uploads/2017/11/VMC_Hamburger_Logo_Blue-1.svg 0 0 E. Christopher Wilder /wp-content/uploads/2017/11/VMC_Hamburger_Logo_Blue-1.svg E. Christopher Wilder2008-11-26 16:50:002008-11-26 16:50:00A gift for Edgar, and a happy Thanksgiving 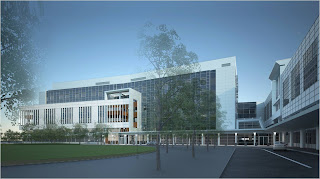 If you pay taxes in Santa Clara County, then Valley Medical Center quite literally belongs to you.

That’s one of three reasons why we’re going to keep you informed every step of the way as we rebuild Silicon Valley’s largest hospital. It’s all starting pretty much NOW…we’re getting set to knock down the old outpatient building (as soon as everyone is moved out, of course) and make room for the new patient tower. Yes, we’re ready to go this winter, now that Measure A passed with more votes than any other issue on the ballot (including Barack Obama. I know…totally amazing.)

The second reason we’ll keep you up to speed is that it’s required. The Citizen Oversight Committee, mandated as part of Measure A, is coming together to ensure the funds are used wisely and per the will of the voters. Watch this space, as I’ll use it as just one way to share information about this massive and crucial project…I’ll get more specific as decisions are made and timelines set.

The third reason? It’s going to be just SO COOL. The new VMC will be beautiful, state of the art, world-class and way more efficient than the buildings it will replace. I know I speak for the executive team of the Santa Clara Valley Health & Hospital System when I say we cannot wait to get going!

The rendering above gives you an idea of what’s coming, and again, we’re not wasting any time. The result will be an absolutely breathtaking VMC – better for patients, and for our commuity.

And why shouldn’t it be? It’s yours.

To all who voted for Valley Medical Center: Thank you.

Since that’s impractical, what we’ll do instead is to start building the new parts of Valley Medical Center. We’ll start soon – early next year – and we’ll keep county residents informed every step of the way. We’ll use the funds wisely, and make everyone proud of supporting VMC.

To all those who donated to the campaign, made phone calls, knocked on doors, or helped shape our messages…well, you must have done it right because Santa Clara County responded. This is a great day for health care in Silicon Valley, and a great day for the thousands of people who work for our county’s largest hospital. The message has been received: We all need VMC, and Santa Clara County appreciates you.

Now, there’s a great deal of work to be done. Let’s get on it!