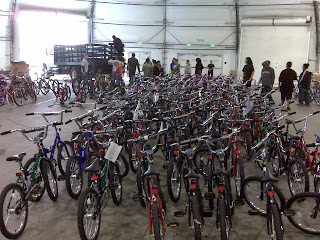 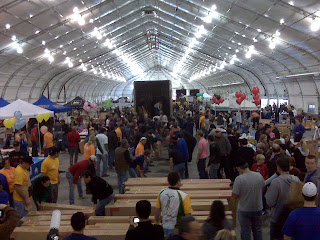 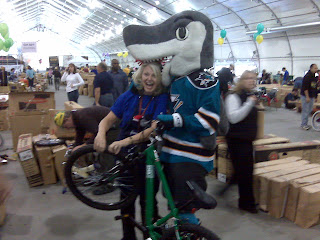 Allow me to demolish any remaining cynicism you have about the holidays:
Saturday was an incredible day, as hundreds of Silicon Valley volunteers came together to build thousands of bikes for children who might otherwise have nothing – and that’s just the beginning…
Turning Wheels for Kids is a grass-roots group of caring people that became a program of the VMC Foundation a couple years ago. Today’s annual Bike Build began early in the morning at the San Jose Convention Center, when FOUR 18-WHEELERS full of unassembled bikes were unloaded by teams of builders. Volunteers from Juniper, Yahoo, Google, Fox Racing, local bike clubs and just regular folk worked their butts off so that kids could have something new, empowering and healthy for the holidays.
At one point, Sue Runsvold was left speechless…hard to do, if you know Sue! She’s the executive director for TWFK and was presented a check for $20,000 by local construction heroes DPR, Inc. Sue’s a nurse manager as well, so you’d think she was used to surprises. Other firms and groups gave too – thousands more – and the money was nothing compared to the inspiration of seeing the kids get their new shiny bikes.
Brandi Chastain, “Sharkie”, and elected officials joined in as Christmas came early for so many needy families. I could write about it all day and not do it justice…to get a better idea of what this event feels like, check out http://www.turningwheels.org/ to see all they offer. Am I proud to be a part of this? Does Rudolph have a shiny shnoz?
P.S. A big hug to Leah Toeniskoetter, VMC Foundation Board Chair and one of Turning Wheels’ greatest champions, for taking these photos. Did you see us on the news?
/wp-content/uploads/2017/11/VMC_Hamburger_Logo_Blue-1.svg 0 0 E. Christopher Wilder /wp-content/uploads/2017/11/VMC_Hamburger_Logo_Blue-1.svg E. Christopher Wilder2008-12-13 16:15:002008-12-13 16:15:002,000 bikes = ho ho ho!
0 replies